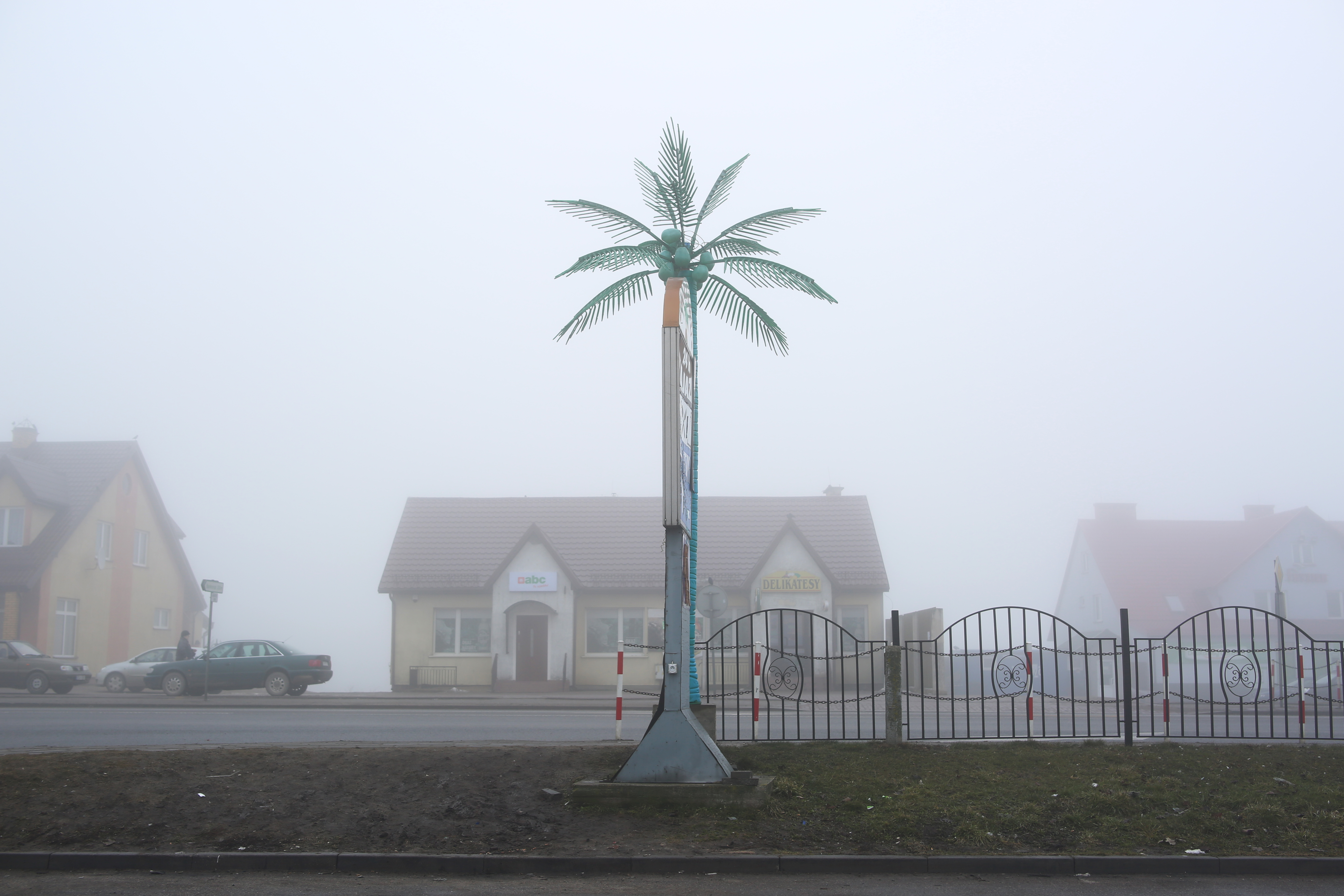 ‘Disco Polo’ documents the aesthetics in Eastern Poland after 1989. This publication focuses on the mixed influences from East and West, the effects of global capitalism on the Polish landscape dominated by consuming colourful advertising. Project presents kitsch of rough-and-ready billboards, pastel-coloured concrete blocks and suburban night-clubs. It explores search for a ‘better world’ and omnipresent visual chaos in the urban landscape. Lack of experts in local housing associations resulted in randomly chosen shades, turning the streets into a vivid collage of pastel tower blocks.

Title ‘Disco Polo’ represents locally popular music genre of the same name, which developed in Eastern Poland around the time of the political transition. The genre created its own aesthetics, from the outfits to the venues where it is performed. Naive lyrics and over-saturated video clips often embody longing for western capitalism and hope for better future.

Paulina Korobkiewicz, is a London-based, Polish born photographer.
in July 2015, she graduated from BA Fine Art Photography at Camberwell College of Arts, University of the Arts London.

Returning to her hometown in Eastern Poland, Korobkiewicz was struck by the
contrasts that existed within these small towns, and began documenting what she saw.
Focussing on architecture, she assembled a strange assortment of images – shabby
suburban nightclubs, pastel-coloured apartment blocks, and all manner of kitsch
aesthetic details.

Her work was selected for Crative Review Talent Spotting project in association with Creative Translation and JCDecaux. Her photographs were displayed on JCDecaux digital screens across the UK in August 2015. She was featured in the 2015 edition of Creative Review Photography Annual, DRECK Magazine, Paper Journal, The Calvert Journal, This Is Paper, Contemporary Lynx and other publications.
Her photo book ‘Disco Polo’ was shortlisted for Bar Tur Photobook Award 2015 organised by the Photographer’s Gallery in London.

She is currently involved in a production of a new photo book ‘Perspectives’ in collaboration with South London based studio Camberwell Press, due to Camberwell Book Prize she was awarded in November 2015.

The reality used to be dull and grey. Now the soulless, identical tower blocks are just a reminder of a turbulent past, a national monument present all around the country. Walk down the street of any Polish city today and you will see old-fashioned concrete juxtaposed with homemade, brightly coloured billboards, often in the most unexpected places, advertising even more surprising content. You are also likely to encounter a great variety of English sounding names, not necessarily spelled correctly. As a generation born in the 1990s, we grew up surrounded by these kitsch attempts to disguise the Soviet past. We took what we saw for granted.

Recognising the uniqueness of these bizarre aesthetics came only after going abroad. Picturesque little squares in London, romantic Parisian alleys, charming restaurants along the canal in Copenhagen, idyllic Italian boulevards by the sea… Being so different to what we were used to back home, they seduced and inspired us immediately. We began to feel shame towards our home country. Torn between years of fidelity to Russia and a new devotion to America, we got stuck somewhere in between — too east for the West, but too west for the East. But when we look at them now, the pseudo-American bars and colourful billboards tell a dramatic story about searching for identity and a desperate need to belong. Once a subject of embarassment and disregard, today they constitute a diary of transition, the path from socialism to the free market and the personal struggles that went with it; an account of generational changes, the memory of an uncomfortable past and the everlasting hope for a better tomorrow.