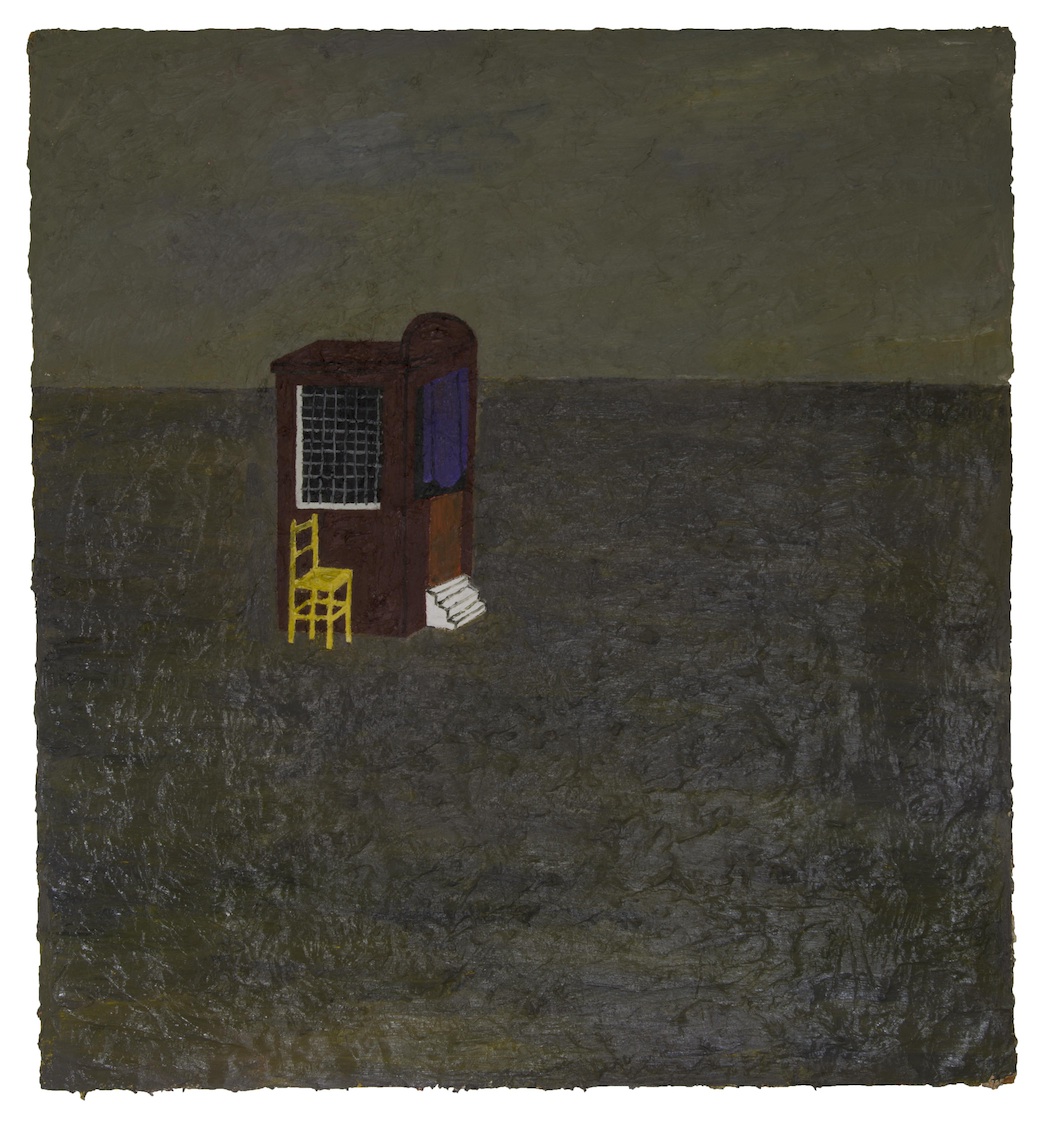 Stephen Newton’s years of contemplation and engagement with painting and drawing (his art is supported by a highly reasoned theoretical position, so articulate that it has provoked numerous academic papers, lectures and publications) has resulted in a distillation of that fusion between the physical and intellectual in the creative process – the essence being a reduction to primitive, almost primeval, images of immense power.

In much of his work the sense of human isolation, ignorance, inadequacy and fragility is offered in the ‘present’ of an image, whilst the suggestion of an undefined ‘redemption’ lurks off stage (through a door or window; over the horizon; beyond a wall, in a mirror’s reflection). In Newton’s painting, this reduction to a language of the icon is supported by a symbolic use of paint. A heavy gestural and highly charged – physical, in fact – technique that results in any pictorial motif, say a building, disintegrating into an abstraction when viewed up close.

By considering the ancient motifs and visual texts of – say – cave painting, one can begin to approach and understand Newton’s work. It is interesting to note when considering wall painting and pre-historic drawings that, contrary to common understanding, individual pictures were repeatedly ‘added to’. Pictorial elements were superimposed – one on top of another – with impunity, often over tremendous periods of time. The Giant Horse Cave at Cape York Peninsular, Australia (20th millennium BC) would be a good example of this. Here, as in many other works from pre-history, there is a total absence of the tenet of a ‘unique’ work of art, or a ‘finished’ work of art – barely conceivable today. Pre-historic peoples did not quest for vanitas, for beauty, but rather aimed to document the complex social and spiritual code within which they existed. For Newton, the paramount consideration is the authenticity of an image by which it reconciles its meaning with a deeper, almost subliminal, spirituality – it is with this that the artist attempts to imbue each individual painting, to generate a relevance and a universal resonance.

Newton has, through a twenty year examination of psychoanalysis and psychometry of Art,(4) evolved a sophisticated series of visual ‘situations’ related to primitive manic states; isolation; disassociation; loss; fear; loneliness; supplication; etc., with which to introduce an engagement with subconscious spirituality. These ‘situations’ have taken on totemic (or iconic) status and are at once familiar to those with experience of Newton’s oeuvre. The Empty Room; the Empty Chair; the Doorway; the Mirror; the Flight of Stairs; and the ever present possibility of transference between one pictorial space – one area of consciousness – and another, via a half open door or window or even, Alice-like, via a reflection. These two spaces, these two realities, are often divided by a line which could represent a horizon, might possibly represent the traditional yin/yang dichotomy of good/evil; conscious/subconscious; light/dark. A perpetual Manichaean conflict.