Christina Reihill: Glad I Did It

Glad I Did It

This November, installation artist Christina Reihill will recreate the prison cell of Ruth Ellis, the last woman in Britain to be executed by the state, after she shot her abusive lover, 25-year-old racing driver David Blakely in 1955. Glad I Did It will be an artist’s interpretation of Ruth Ellis’ cell, imagined moments after her hanging, informed by a close reading of the psychiatric notes, prison files and diaries. A video piece on the lower level of the gallery will feature an exclusive interview with the artist presented by Madeleine Keane, Literary Editor of the Irish Sunday Independent.

Ruth Ellis’ execution on 13th July 1955 was a turning point in the death penalty debate in the UK. Ellis unapologetically declared her intent was to kill her lover, who she shot five times at point-blank range. In court she infamously stated:

Many sympathised with the abuse she suffered at the hands of Blakely, who famously caused her to miscarry following an alcohol-fuelled row about another woman.

Glad I Did It asks visitors to step into Ellis’ mind at this crucial moment in history and to consider how easily they could have been in her shoes. The installation examines the thwarted desires and impulsive behaviours that led to Ellis’ execution, and explores how we all can be victims to our own addictions.

Recalling the darkness of her own addiction to drugs and alcohol, artist Christina Reihill prompts visitors to questions how ambition, desire, loss and grief impacts our lives and asks the question ‘how dissimilar are we all from Ruth Ellis really?’

The prison files illustrate Ellis’ relationships with her family, psychiatrist, lawyer and even the prison warden, and reveal the woman behind the media speculation, who has been on trial by the British public ever since.

Ellis famously declared her reason for wanting to die:  “I want to join him” she repeated despite efforts that could have saved her from the hangman’s noose.  If she had presented herself as a victim this could have spared her execution. But she didn’t. The artist believes Ellis wanted to die and appreciated her time in jail.

In her prison cell, Ellis, a Jewish nightclub hostess dismissed as a “tart”, could, for the first time in her life, experience the respect and dignity she needed.  Here she was addressed as “Mrs. Ellis” and listened to, and the relationship plagued by violence and alcoholism that her lover had tried to hide, was front page news.

The artist Christina Reihill claims that in all that has been written, staged, documented and filmed, Glad I Did It reveals facts about Ruth Ellis, never identified before.

About the trial of Ruth Ellis

Ellis, a 29- year old Jewish girl from North Wales was working as a nightclub hostess in Knightsbridge when she met wealthy racing car driver David Blakely. Their affair was passionate but violent, marked by alcoholism, abortions and infidelity.  On Easter Sunday at 9pm, April 10th 1955, Ellis shot Blakely five times at close range, outside the Magdala Tavern in Hampstead and put the gun to her head for the last bullet, which failed to discharge. She was hanged for his murder three months later. “It’s obvious I intended to kill him” she famously declared in court. Her trial was highly publicised and caused widespread controversy, as details of the violence she endured throughout her life emerged. Following pressure from the British media including the Evening Standard and the Daily Mirror, the case against the death penalty was strengthened, and in 1965 it was abolished in Great Britain. 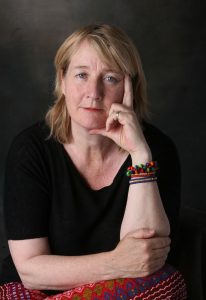 Born and educated in Dublin, Christina studied psychology at Harvard, and later went on to read multi-media and communications at the London Institute, before starting a 12-year career in journalism working for Vogue, The Evening Standard, Irish Times and Sunday Independent.

In the early 90’s she returned to Ireland for drug and alcohol treatment at The Rutland Centre. For the next decade she trained and practiced as apsychotherapist. During this time she wrote her debut book SoulBurgers, and later created a performance based on the book, and has since produced a number of award-winning installations. In 2012 she won the Allianz Tile Style Artist of the Year Award. Christina created an Urban Art work in 2016, called WallWalks and last year staged Wit’s End, a major installation at Smock Alley Theatre on Dorothy Parker’s last days before her death, opened by Patrick Murphy, Director of the Royal Hibernian Academy.