The Voices Film Programme at Bermondsey Project Space highlights underrepresented voices in cinema and presents some of the UK’s most talented emerging film-makers.

The Voices Film Programme is supported by Film Hub London, managed by Film London. Proud to be a partner of the BFI Film Audience Network, funded by the National Lottery. www.filmlondon.org.uk/filmhub

December: Women on Screen and Behind the Camera

This October The Voices Film Programme celebrates Queer Identity. Come along to Bermondsey Project Space for a selection of Screenings and events spotlighting LGBTQIA+ filmmakers.

Step into the world of queer cinema and enjoy a diverse selection of genres from comedy to documentary to fantasy.  The programme places a significant focus on the experiences of young people and brings together film-makers from across the UK in an artistic exploration of queer culture and identity.

The First event of the programme was a sold out success audiences enjoyed a collection of short films by emerging LGBTQIA+ Filmmakers with genres spanning comedy, documentary and fantasy

The screening was followed by a Q&A with the creative teams.

Hold The Sausage by Cal Freeman.

World of my Own directed by Anna Rooney

From Nigeria to England, Simisolaoluwa Akande’s fascination with the art of storytelling has crossed continents before expressing itself through film. Now a multi-award-winning documentary filmmaker, her films embrace a deeply collaborative approach to storytelling that provides black stories space to be told and retold. 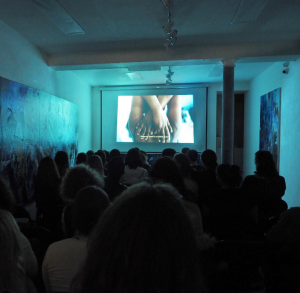 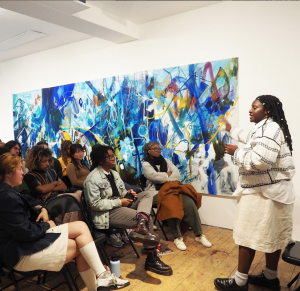 down there the sea folk live 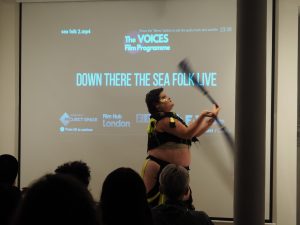 Selected as part of  the BFI London Film Festival 2020 down there the sea folk live is a experimental documentary the experience of starting HRT for trans singers who rely on their voice for performance.

This November the programme focusses on Race and Identity. Enjoy a diverse selection of genres from dystopian drama, to documentary, to spoken word and performance films. The programme places a significant focus on the experiences of young people and brings together film-makers and artists from across the UK and further afield.

This programme aims to create opportunities for active participation and creative exchange through screenings, talks, Q&A sessions and performances.

A selection of surreal and dystopian shorts from directors Dipo Baruwa- Etti and Bradley Banton followed by a Q+A session.

THE LAST DAYS Directed by Dipo Baruwa-Etti. In a near-future world where you can discover your Death Day, an apolitical woman learns that she and many Black people have been given incorrect dates and seeks justice before her time runs out – that same day.

Blackmael Directed by Bradley Banton. In this surreal short that explores race and class mobility A Happy-go-lucky postman comes across a person he never thought he’d meet…

A Horror Story (The Ballad of Adam, Ade & Eve) Directed by Bradley Banton. With fertility rates in men dropping to dangerous levels, state funded agencies have resorted to unorthodox practices to unite a divided Britain…

A screening of three short films by poet and performance artist Nina Mdwaba followed by a live spoken word performance and Q&A session.

Nina is a poetic-activist, who adopts different lenses and perspectives to create dialogue. They work with music, film, and movement to explore memory, racial identity, queerness, and healing practices through their art, reflecting their South African ancestry and spirituality

THE AIR I BREATHE: Film focuses on the illegal air pollution levels in racially diverse London boroughs where residents twice as likely to die from lung diseases

“I’ll Believe It When I See It & #Elevatedvoices: This spoken-word short film reflects on the feelings of the artist (Nina Mdwaba) during the events that followed the death of George Floyd and the Black Lives Matter 2016 – present

LET’S TAKE IT HOME: A digital spoken word and visual performance film exploring the blurred lines between being together and being apart

A Screening of award- winning documentary Canada’s Keepers followed by a Q&A with the creative team.

Come along to the gallery for a selection of short films curated by Floor Five Collective.

Floor Five Collective is a London-based multidisciplinary group led by women of colour. Their practices revolve around making visible the identities and ways of being that have been absent or distorted within canonical representation. They are a collective of thought, that marinate their minds in discourse shaped by personal experiences and investigative research. Floor Five is committed to generating individual practices as a result of these discussions, which reveal old truths from new perspectives. Their work is soaked in references and sounds that range from cultures such as South East Asia, the Middle East, The Caribbean, Ivory Coast and Réunion Island.

I’m Migrant is a short-film series by Iraqi writer and photographer Yamam Nabeel, part of a larger project of photography and written word, focusing on the lives of immigrant and exiled artists, poets and writers from the Arab world and their contribution to western culture.

The first two episodes of the series will be screened, the first episode features the Iraqi master calligrapher Ghani Alani who has been living in Paris, France since 1967, with the second one introduces us to a collaboration between Iraqi painter Dia Azzawi and the Iraqi poet Nabeel Yasin.